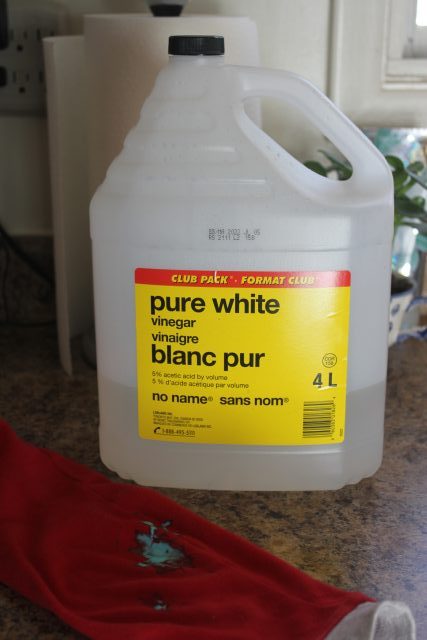 As you may well know, we do a lot of crafting around here. It’s probably one of my favorite parts of managing my daughter’s Youtube Channel. I love perusing Pinterest for unique and fun craft ideas or crazy science experiments.

The other night, Trinity pulled out some containers of slime that we had attempted to make for a video, but never got around to filming. Craft videos take a lot of extra time and planning. The slime was sitting for so long that it had lost it’s form. Luckily Pinterest came to the rescue and I found a way to ‘activate’ it and make it playable again. Slime is SO FUN! In a matter of minutes we had everyone, big and small, around the table playing with slime.

As most crafting days go, there’s usually some sort of mess. My daughter stuck the sleeve of her pyjamas in the slime. We were able to get a lot of it off, but the more we rubbed, the more the slime seeped into the fabric.

Here’s a super simple fix for those slime mishaps! And the best part….. It only takes one ingredient that you probably already have on hand!

How To Remove Slime From Clothes

Pour some vinegar on the area and let it sit for 10-15 minutes. This will give it sufficient time to break down the slime to be removed easily. With a paper towel, or old cloth, simply wipe away the slime, then wash as usual. That’s it! Couldn’t get much easier than that right?! Look at that! Good as new!

I love homemade fixes! I cringe at all the clothes I’ve thrown out over the years, thinking they were ruined, when I probably had a simple fix right in my own cupboards!

3 thoughts on “How to Remove Slime from Clothes”

Hi there friends! I’m Carrie,  a mom of 5 beautiful children and I absolutely love everything DIY. I’m so glad you stopped by for some inspiration. Grab a cup of coffee and lets get DIYing!